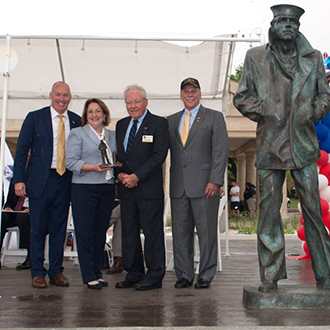 On April 2, 2016, the Central Florida Navy League dedicated the Lone Sailor Navy Memorial at Blue Jacket Park, honoring those who served at the Naval Training Center of Orlando for more than three decades.

The Lone Sailor monument will serve as a reminder of the legacy of the Navy’s presence in Central Florida, and will be an inspiration to those who are currently serving or will serve the United States Navy.

Following the ceremony, the memorial was officially “given back” to the city for safekeeping for years to come. 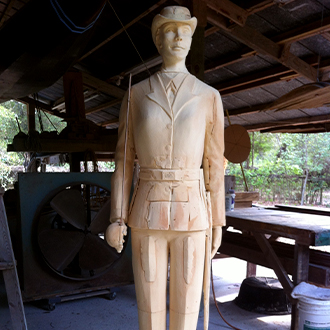 The Legacy Continues with the Navy History Wall

We now focus on completing the History Wall, an exciting 10 panel storyboard illustrating the rich history of the Naval Training Center.

The Memorial Wall will be 10 panels stretching more than 30 feet long, and will tell the story of the Navy’s history in Orlando in pictures and words including the mission, and several panels describing the recruit experience, the Lone Sailor, the Blue Jacket Recruit statue, what the Navy is doing today in Orlando, and finally a “Well Done” to our donors and committee members.

These organizations started it all!
Thank you for helping us make the Lone Sailor Navy Memorial a reality for Orlando.

The Making of the Lone Sailor Navy Memorial: From Design to Build to Dedication

Support the Cause: Purchase a Paver

Continue your support of the Lone Sailor Navy Memorial! Pavers are available in two sizes and are a wonderful way to memorialize or honor someone.